Where do I start…”What a day” – how about that!

There was a plan for us all to meet 07:15 at Felixstowe Fire Station, starting the 100km Suffolk Fire Ride in Wave 2 08:00 hours.  The Bury boys (including Ixworth), Con, Ken & Sam thought oh no, let’s ride from Bury St Edmunds to Felixstowe, do the 50km ride, then ride home – hoping to get in around the 100 miles.  They then drafted in Dale, who would leave from Hadleigh, meeting them enroute at Warren Heath, Ipswich.

This plan worked well, with the weather holding out – the forecast was for sporadic rain and thunderstorms!  Dale arrived at Warren Heath, 15 miles into his journey with Con, Ken and Sam arriving within 5 or so minutes, having already completed 30 miles.

The ride from Ipswich to Felixstowe was enjoyable, lovely early morning sunshine, good conversation and great company.  Arriving at Felixstowe near enough on the buzzer for 07:15, camera thrust into the early riders faces by Haze – as we have all come to expect, a brief first interview was had for social media and the team formed at the back of Felixstowe Fire Station.  Con, Ken and Sam, hitting 40 miles by this point with Dale on 25m.

The atmosphere was already starting to build, Carolyn Crabb and Alex Stephenson had a good hold of proceedings, meeting, greeting riders, pointing us all in the direction of registration, food, drink and the support team, Breeze Events, The Salvation Army, Sally Hammond, Jim Golder, Alf Percival and more (apologies if I haven’t named you).

Our LEJOG crew, chatted with other riders, Suffolk’s Chief Dan Fearn, our new Area Manager Andy Smith (who has recently joined us from West Mids Fire & Rescue) and said hello to everyone we came across.

Unsurprisingly Vinny (Nigel Vincent) already had a grump on 😂, Dotty had left his brand new @Tru7Group lycra kit at home, the whole team were sporting our new attire and Vin was the odd one out – not for the first time!  Off Dotty went to collect Vinnie’s clothing.  A few videos and photos were done, before it was time for Wave 1 to leave – 07:45, waved off by our LEJOG team, then it was time for Wave 2, 08:00 before we set off in-between Wave 2 and 3 – round 08:10.

It was a glittering start, 12 riders all dressed in our stunningly cool, very bright Champion Systems Ltd designed, TRU7 sponsored kit.  Our first support team stop was around 25km, Phil and Alf had commandeered the Fire Prevention Vehicle – thank you Dale Nunn.  First stop we were also met by our Chief Dan and Area Manager Andy – great to see them both fully supporting our training, The Suffolk Fire Ride and our LEJOG2021 challenge!

At this point a discussion was had on whether Ken, Con, Sam and Dale would turn around as planned, cycling back to Felixstowe to cover off the 50km ride before continuing on home, but someone mentioned to Dale, you might as well stay on for the 100km now, Sam initially said he was up for it and the team tried desperately to bribe Ken and Con to stay on too.  Con was tempted but thoughts of his family and dealing with Mrs B, soon made the decision for him, Ken went with a similar mindset.  The remaining team cycling the 100km had already left the support stop and Dale had to make a decision quickly, he decided on the 100km route but Sam, realising he had a long way to cycle on his own back to Ixworth if he didn’t stay with the Bury boys had made his mind up too.  With the 3 riders heading back to Felixstowe and then off to Bury – a long cycle ride, the remaining team and support crew headed off for the next stop, 60km in, in close proximity to Snape Maltings.  No dramas at this stage, we passed a cyclist or two fixing a mechanical issue, generally punctures and always asked if they needed a hand but with the riders in waves, somebody was always at hand to help out.

Reaching Snape, rest point 2, had been a task, there were narrow roads, complete with sand, gravel and as we have come to expect in Suffolk these days, lots of pot holes, however these were enormous – nearly covering the width of the road in places.  That did slow us down a little but we arrived to meet Phil and Alf, our excellent support crew, with the kettle already boiling, biscuits, bananas and general refreshments ready to go.  A few of the other Suffolk Fire Ride riders also utilised our stop and were gladly welcomed by the whole team, we even had a fellow rider Alan, join us at this point and stay with us until completion – kindly donating £20 to our cause when we reached Felixstowe – thank you Alan, lovely to meet you.

We also had the 4th emergency service in attendance with us pretty much from this point forward in Jim Golder – Fire Bike (motorbike) support, Jim where possible checked roads up ahead, ensured  junctions were safe to cross and backed up the team – usually 5 minutes after a puncture or malfunction, which did make us all giggle.

Talking about punctures, it was that time! Sadly for Morale Officer Dave Edwards his time had come, down went the tyre whilst riding through the forestry area of Tunstall (I believe it was).  As you can imagine with Dave having a full team of 11 other riders, plus Alan riding alongside him, he would have all the help he needed – or would he, the banter started and it went on, Dave’s smiles turned to frustration and some course words were had with the team who clearly enjoyed Dave’s misfortune a little more than they should have done.  “Dave eventually carried on his ride with a comment of “your time will come”, you’ve guessed it, that time did come, this time for high flyer, carbon boy Simon Lewis with his D12 electronic shifting, cruise control and recliner seats (I jest), beautifully crafted machine of a road bike, suffering a rear puncture whilst traversing a nice hill section.  There was a little team bonding as I am sure you can imagine with very little reference made to the earlier incident🤔😆, to be fair to Mr Edwards (Dave), he did fully assist Si with the inner tube change, unlike the rest of the team, who were too busy, videoing and taking photos of Simon’s suffering.  Jim Golder (Fire Bike) again arriving just as the puncture was fixed and the team were about to head off 🤷‍♀️🤦‍♂️.

Following this it was the last leg (well for most of the team) back to Felixstowe, we had the enjoyable encounter of meeting Simon’s young lad approximately 3-5 miles from home, who then cycled with his Dad back to the Fire Station – a lovely memory for Dad and Lad to have.

Upon arriving back at the Station, we were greeted by the wonderful team of organisers, Carolyn, Alex, Sally and all the other volunteers and helpers.  It was time for a few photos, videos, top up on electrolytes and dig into some delicious pasta or macaroni cheese, kindly prepared and served by another volunteer.

The Team assisted in the clear up of the Station whilst Dale headed off back home to Hadleigh, he was 87 miles in upon leaving Felixstowe with just under 25 miles to go.  Dale arrived back home having completed just over 110 miles for the day, to then be told (yes told) by his wife that he needed to drive to Lakenheath to watch his eldest son play cricket.

Conrad, Ken and Sam, completed between 105 and 108 miles each too – a cracking achievement and splendid day on the road.

Followers: 241
The Longest Ride 2021 Retweeted · Chris Kirby @SYFRChrisKirby
Wednesday, July 28th, 2021 at 6:28am
@FIRE_Editor hey Fire Magazine, have you seen about the fantastic plans to raise funds for the @firefighters999 by a team from @SuffolkFire and @SYFR. They’re riding Lands End to John o Groats in September. Any support welcome @LongestRide2021
View on Twitter
4
0
The Longest Ride 2021 @LongestRide2021
Tuesday, July 27th, 2021 at 3:53pm
Working hard 💪 over 90 miles covered Saturday. We hope you enjoy our short video.

Please support us and visit https://t.co/UQfkIZQ58T 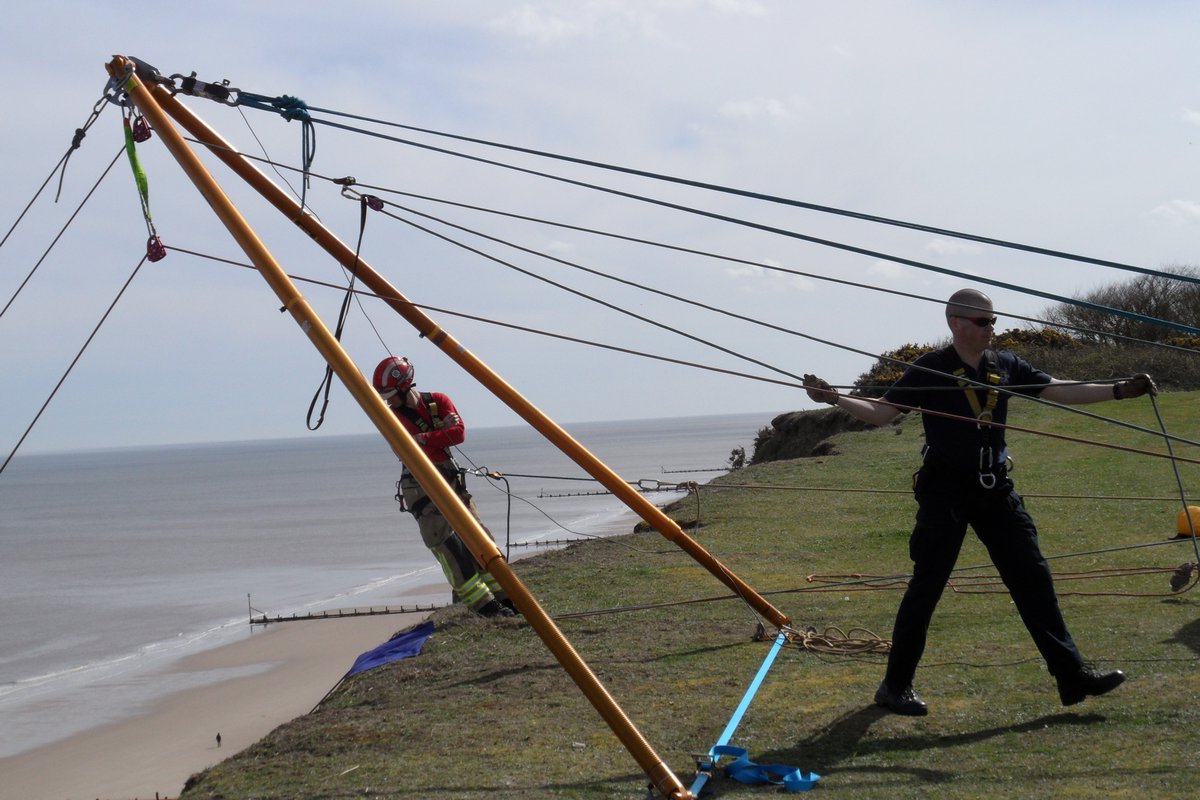